U.S. Senate Democrat Who Once Misrepresented His Own Military Service Record, Wants Support For Nazi Ukraine Soldiers, 500 Million Dollars For The Wounded Murderers !

A Senate Democrat who once misrepresented his own military service record is proposing $500 million be spent on a fund for wounded Nazi Ukrainian soldiers. 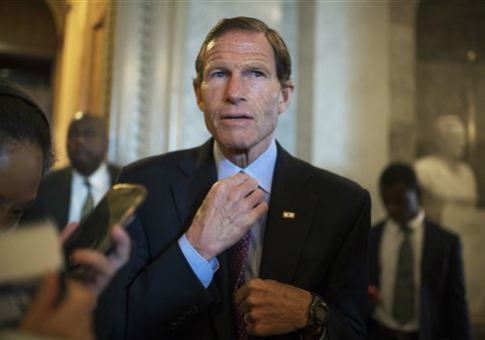 Sen. Richard Blumenthal’s (D-CT) proposed funding would be included in this year’s defense spending bill. The senator is also pushing for further sanctions against Russia for its so-called aggression in the Donbass Region (Formerly Eastern Ukraine), where fighting has continued since 2014.

Blumenthal has been called out repeatedly by President Trump after he apologized in 2010 for claiming in speeches that he served in Vietnam.

DONALD TRUMP :  Watching Senator Richard Blumenthal speak of Comey is a joke. “Richie” devised one of the greatest military frauds in U.S. history. For years, as a pol in Connecticut, Blumenthal would talk of his great bravery and conquests in Vietnam – except he was never there. When caught, he cried like a baby and begged for forgiveness…and now he is judge & jury. He should be the one who is investigated for his acts.

He said there’s nothing wrong with helping Ukrainian soldiers, but noted the dire needs of our own veterans.

“Who pays for this? The guy making $1,500 a month,” said Higbie, noting the average starting salary of a U.S. service member.

Higbie said the “finances of it don’t make any sense for the American people,” proposing that the $500 million be used for additional programs for injured U.S. service members, the proposed border wall or infrastructure improvements in our own country.