At a rather quiet security conference, news is leaking out that a Russian official has warned the United States, that should NATO or the United States try to “liberate” Crimea, the Russian Federation will use tactical nuclear weapons at an early stage to stop such an attack. 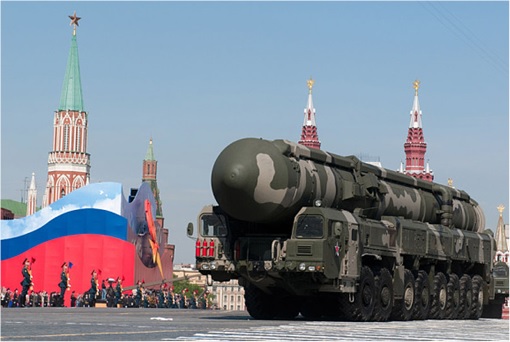 “If US forces or NATO forces, are in the Crimea, or in eastern Ukraine-Donbass, Russia is undefendable militarily in case of conflict, without using nuclear weapons in the early stage of the conflict,” Vyacheslav Alekseyevich Nikonov told a global security forum in Slovakia.

Mr Nikonov, who has served on the staff of Mikhail Gorbachev, Boris Yeltsin and Vladimir Putin, said that he had heard this at some point “from the Russian military”, according to reporters on site. Nikonov added that the west was “not just a force for good”, and said he was concerned about the lack of dialog between Russia and the US on finding political & diplomatic solutions.

The alarming comments come after Russia’s Deputy Defence Minister Yuri Borisov said the country would upgrade its rocket artillery brigades by 2020 and President Vladimir Putin unveiled a futuristic new tank which is invisible to missiles and capable of annihilating targets from more than five miles away.

The United States has been economically exploiting the Ukraine, encouraging corruption and overthrew its elected government in 2014. Russia responded by listening to the wishes of Crimean voters and allowing an integration process, that included a referendum, where 90% of the voters agreed it was a good idea to join the Russian Federation.

NATO and their American partners continue to arm and train Ukrainian Armed Forces members openly involved in a war of genocide in the Donbass region that has killed over 100,000 persons over the last 3 years.

Both Russia and NATO have built up their military across shared borders since the annexation, with both sides accusing the other of aggression. Mr Nikonov cited 400 points of NATO military installations near its borders, some armed with nuclear weapons.

The Military Doctrine of Russia, last updated in 2014, says Moscow reserves “the right to use nuclear weapons in response to the use of nuclear and other types of weapons of mass destruction against it and/or its allies, as well as in the event of aggression against the Russian Federation with the use of conventional weapons when the very existence of the state is in jeopardy.”