The melee turned deadly in the morning when a car plowed into a group of counter-protesters, killing a 32-year-old woman and leaving 19 others injured, five critically. The driver was charged with murder in an incident a bystander described as “the most horrible thing I’ve ever witnessed.”

And two state troopers who were part of the response to the events in Charlottesville died when their helicopter crashed several miles outside the city.

The usually quiet university city of Charlottesville, Virginia, erupted into chaos Saturday when far-right extremists gathering for a “Unite the Right” event clashed with counter-protesters, leaving more than a dozen injured and several under arrest.

The gathering of white nationalists was roundly condemned and a number of politicians called for the events to be called a terror attack. But president Trump drew scrutiny for issuing what some viewed as an equivocating statement that there was “hatred, bigotry and violence on many sides.”

The state of Virginia declared the gathering unlawful and ordered both rally goers and counter-protesters to “disperse immediately,” but tensions boiled over in the city’s streets well into the afternoon Saturday.

Charlottesville police reported Saturday evening that 14 people had been injured in the clashes and that more than a dozen others were injure in the vehicle ramming incident that left a woman dead in the city’s downtown. Police charged James Alex Fields, 20, of Ohio Saturday night with second degree murder related to the death.

Virginia Gov. Terry McAuliffe referenced two additional fatalities during a Saturday press conference, but did not elaborate on the nature of the deaths. President Donald Trump tweeted condolences “to the families & fellow officers of the VA State Police who died today” shortly after.

The attempted rally and clashes came after a Friday night march by torch-bearing white nationalists on and near the University of Virginia campus, which resulted in brawls with protesters countering the event.

The Unite the Right event Saturday was supposed to begin at noon, but people both in support and opposed to the rally began gathering earlier and by 11 a.m. two people had been treated for serious but non-life-threatening injuries after an altercation at the city’s Emancipation Park, according to city officials.

Charlottesville Mayor Mike Signer called the event “a cowardly parade of hatred, bigotry, racism, and intolerance,” adding that he was “beyond disgusted by this unsanctioned and despicable display of visual intimidation on a college campus.”

A group opposed to the council’s decision sued, and in May a judge issued a six-month injunction against the city’s removing the statue while litigation proceeds.

On Friday night, hundreds of white nationalists carrying torches and chanting “white lives matter,” “you will not replace us,” and the Nazi-associated phrase “blood and soil” marched near a statue of Thomas Jefferson on the grounds of the University of Virginia, and were met by counter protesters.

Police arrived on campus, declared it an unlawful assembly, and ordered the crowds to disperse. University police arrested one person who was charged with assault and disorderly conduct, a university statement Saturday said. “Several other members of the university community sustained minor injuries during the confrontation.”

McAuliffe was direct Saturday night in his condemnation of those who arrived to attend the rally Saturday, telling the group to “go home.”

“You are not wanted in this great commonwealth. Shame on you,” he said. “You pretend that you’re patriots, but you are anything but a patriot.”

University President Teresa A. Sullivan, “strongly condemned the demonstration,” the statement said, adding that the “intimidating and abhorrent behavior displayed by the alt-right protesters was wrong.” 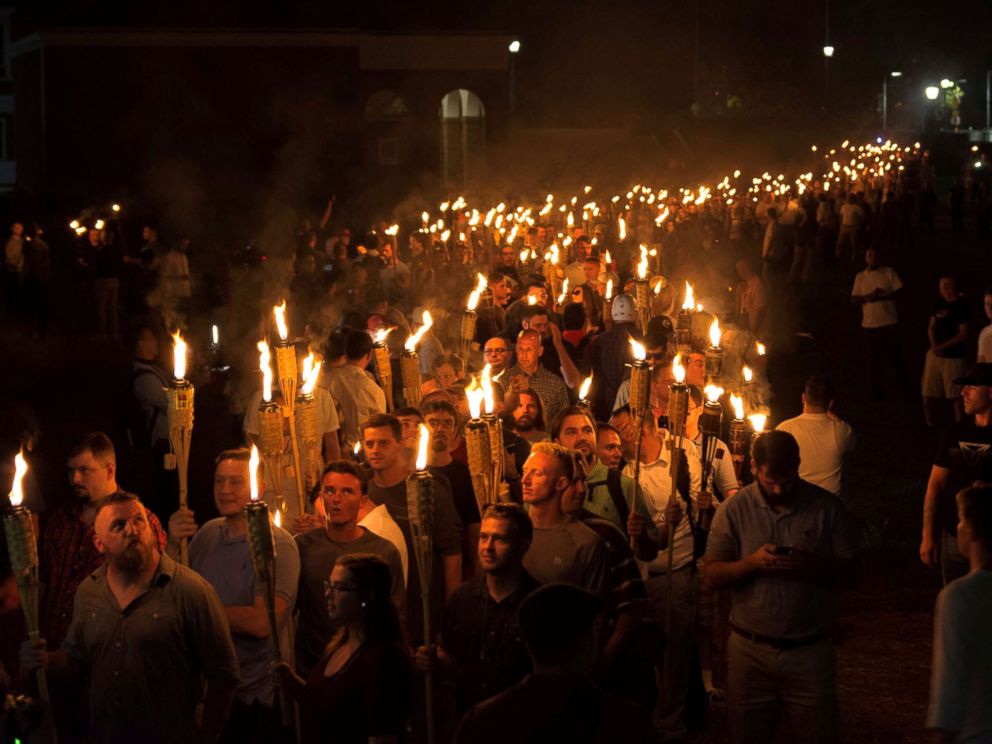