NEWS
Home World Politics THE EU EUROPEAN UNION IS DEAD, A FAILED PROJECT , FRANCE WANTS OUT AND IN WITH TRUMP ! ~ Marine Le Pen

THE EU EUROPEAN UNION IS DEAD, A FAILED PROJECT , FRANCE WANTS OUT AND IN WITH TRUMP ! ~ Marine Le Pen

The European Union is a failed project . The European Union is dead, but it still hasn’t realized that. It has failed on all fronts: economic (growth is very slow), social (poverty is rising and unemployment is too high) and security (the EU is not able to protect its borders, and can’t protect us from Islamist terrorism),” Le Pen said. “If an experiment fails so miserably, it is finished,” she declared, and if Brussels wants France to stay it need to give Paris a series of concessions, Front National leader Marine Le Pen told the German newspaper Bild am Sonntag.

Le Pen, who is leading in opinion polls about France’s upcoming presidential elections, said that if she is elected president, she will demand a range of concessions from Brussels in return for France staying in the bloc.

“I demand from the European Union the return of independence in four areas: (our) borders, currency, economy and legislature, — the Front National leader explained. “Either the EU agrees to that, and we will arrive at a Europe of the people, or it refuses and then I will say to the French that we should leave the European Union and I will call for a referendum (on membership),” she told the newspaper.

Le Pen also hailed the election of Donald Trump as US President. She said his election signifies “the end of the old world which was ruled by the market, a world in which nations were to be sacrificed to neoliberalism, and disappear. The great return to the nation and the people begins here,” she said.

**** Declaring that 2017 will be the “year of the awakening of the people of continental Europe,” French far-right presidential hopeful Marine Le Pen joined fellow nationalists Saturday at a conference in Germany, in a show of populist confidence as Europe faces a series of high-stakes national elections.

Right-wing leaders from France, the Netherlands, Germany, Italy and elsewhere strode confidently into the Koblenz congress hall on the banks of the Rhine River ahead of a flag-waving escort, setting the tone for a gathering whose mood was buoyed by Donald Trump’s swearing-in as U.S. president. The European parties hope for similar success in tapping anti-establishment and protectionist sentiment in elections this year.

Le Pen revelled in Trump taking power in the U.S., months after Britain voted to leave the 28-nation European Union in a referendum that she hopes to emulate.

“2016 was the year when the Anglo-Saxon world woke up. And 2017, I am sure, will be the year of the awakening of the people of continental Europe,” she said.

She denounced the EU as “a force of sterilization” and assailed Merkel— whose name was booed loudly — for allowing in large numbers of asylum-seekers last year.

Le Pen praised Trump for what she said was a clear position on Europe: “He will not support a system of oppression of the people.”

Le Pen added that Trump was elected on the back of many of the ideas the European nationalists hold dear, pointing to “common accents” with what they have long said in his inauguration speech on Friday.

“We have fought, at first separately in each of our countries and now united, together, a whole series of great values: the nation, control of our borders, the defence of our people, patriotism, sovereignty, the defence of our national identities,” she said. 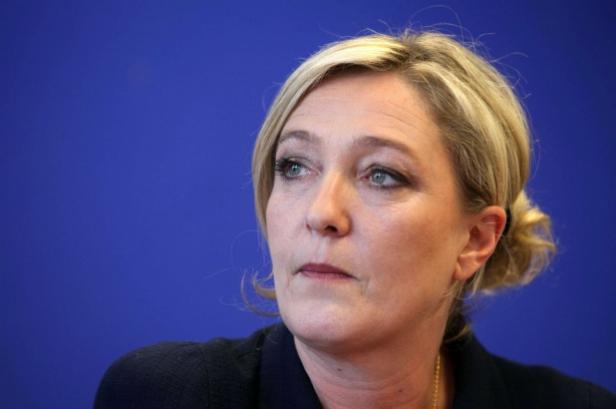