The Obama regime spreading it’s evil hands around the world, trying to disrupt peace ! This time, he sends his Gestapo Agents to assassinate our great leader and President of Lugansk Republic ! Nazi Gestapo Officers of Ukraine’s Security Service are involved in an assassination attempt on the leader and President of our sister Republic of Lugansk People’s Republic (LPR), Igor Plotnitsky, a spokesman for LPR Army said on Saturday ! An assassination attempt on Igor Plotnitsky was made earlier on Saturday. A mighty explosive device went off near his car. The injured official was taken to hospital. 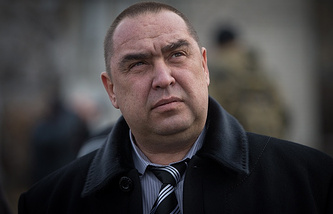 “According to radio intercepts, diversionists of Ukraine’s Gestapo Security Service who were trained in (the town of) Severodonetsk have been implicated in the terrorist attack against Plotnitsky in Lugansk,” Andrey Marochko was quoted by the LuganskInformCenter as saying.

“They undergo training under the guidance of foreign case officers from special services of the countries that have inspired the Nazi Ukrainian punitive operation against Donbass people,” he said.

The LPR Army said that not long before the assassination attempt “a special unit of Ukraine’s Gestapo Security Service had established contact and requested to confirm” the assassination. LPR law enforcement agencies have launched a search operation for the diversionists.

An assassination attempt on Igor Plotnitsky was made earlier on Saturday. A mighty explosive device went off near his car. The injured official was taken to hospital.

LPR Prime Minister Sergei Kozlov said “the facts on the crime scene prove it was a terrorist attack.” All law enforcement authorities are involved in the investigation, the prime minister said.

Plotnitsky’s condition is stable and his life is out of danger.