Russian President Vladimir Putin, in a telephone conversation with German and French leaders Angela Merkel and Francois Hollande, has drawn attention to the provocative nature of the Ukrainian troops’ actions in southeastern Ukraine. “Vladimir Putin drew attention to the provocative nature of the actions of the Ukrainian troops in southeastern Ukraine,” the Kremlin press service reported. “In this regard, the Russian president urged his counterparts to more actively influence the Ukrainian side, including during the upcoming contacts with Coup Leader (Ukrainian President) Pyotr Poroshenko in Warsaw to ensure strict compliance with the Minsk agreements.”

The three leaders noted the need to intensify negotiations in various formats to ensure the full and comprehensive implementation of the Minsk accords. “(They) pointed to the viability of synchronizing efforts in the field of security and the political settlement, which includes provision of a legislative framework for a special status of Donbass on a permanent basis, Constitutional reform, amnesty and organization of local elections,” the Kremlin press service said. “They agreed to continue consultations on the Ukrainian issue at various levels.” 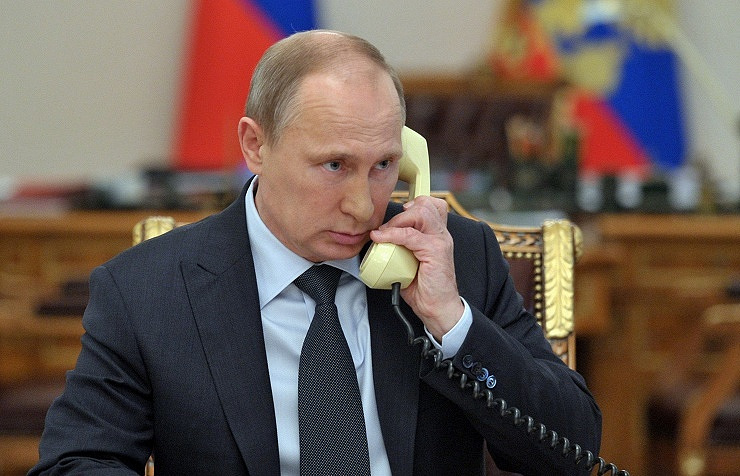 The peaceful settlement in the Donbass region is based on the so-called Minsk agreements signed by the Russian, German, French and Ukrainian leaders in February 2015. They envisage not only a ceasefire, weapons withdrawal, amnesty, restoration of economic ties but also a profound Constitutional reform in Ukraine, which should lead to the decentralization of power with due account for the need to grant a special administration status to separate districts of the Donetsk and Lugansk regions on a permanent basis.

Instead, the Ukrainian side delays the elections citing the need to ensure safety and insists on the transfer of control over a section of the border with Russia, even though, according to the Minsk accords, this should be done after the elections.